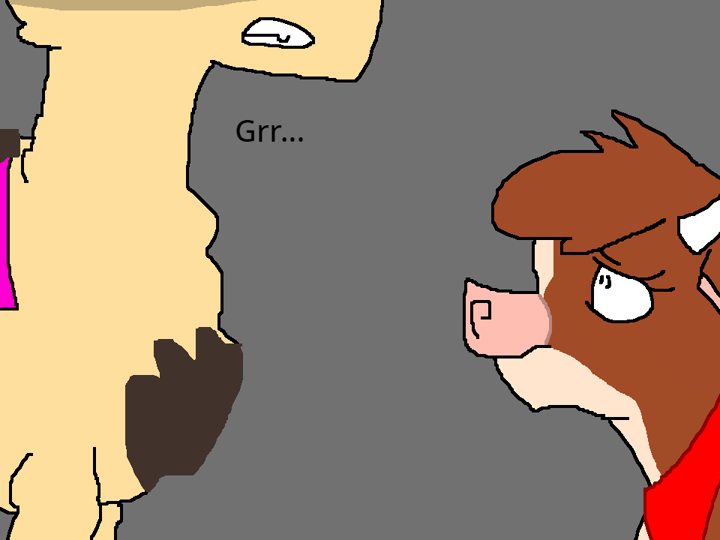 @[email protected] (Arizona was just done with the setup of a prank she was gonna pull on Velvet. She then went to hangout with Shanty. An hour later, Arizona heard a scream. thinking it was Velvet, she ran over there as fast as she can. But when she got there, she was in for a harsh surprise.) Arizona: OH NO! PAPRIKA! I'M- Paprika:(Angry) ARIZONA DO THIS?! Arizona: (Scared) Um…yes? Paprika: GRRR… Arizona:(Upset) I-I-I'M SORRY! Paprika: (Really angry and shouting) SORRY NO CUT IT THIS TIME!! Arizona: UMMMMM…. Paprika: YOU PRANK ME! NOW ME ALL MUDDY! (The others were all spying on the argument.) Velvet: Oh no. Tianhuo: Oh boy. What did Arizona do this time? Oleander: Paprika is real mad. So i think Arizona did something really screwed up. Dante: UGH. I told everybody something bad was gonna happen. But did anyone listen? NO! Nobody listened! Destiny: Oh come on Dante. Dallas: We never- Deja'vu: Listen to you. Dawkins: SIGH Daily issue. Natsuki-meow: My goodness. Paprika seems really P****ed. Pom: Yeah. Like angry as h***! Big doh: Uh, did you cover Little doh's ears Iris? Iris: I covered them. Natsuki-meow: I think she's covered in mud. Oleander: How can you see? Natsuki-meow: (Stern) Just because i have no eyes and have a blindfold on, it don't mean i can't judge by tone of voice. Oleander: Oh. (Back to the argument) Paprika: (Really angry) ARIZONA, YOU ARE A BIG FAT MEANIE!! Arizona: (Thinking) But…i'm not fat. Paprika: WELL?! Arizona: UMM….IT WAS FOR VELVET…I'M SORRY. Paprika: I NO BELIVE YOU! YOU NO LONGER PAPRIKA FRIEND! NO GET NO FLUFFY SNUGGLES! Arizona: (Tears in her eyes) What? Paprika: VELVET GIVE YOU PUNISHMENT! PAPRIKA WASH UP NOW! Arizona: (Crying) W-W-Well…okay. (SNIFF) Arizona walked away from Paprika, and Paprika walked away from Arizona. Then Arizona noticed Velvet and her spying friends. She walked over there to her. Velvet: (Really stern) Well. Arizona: (Remorseful) W-W-What is it? Velvet: (Really upset) Don't "What is it?" me! We know! Arizona: You know? Dawkins: We saw everything! Arizona: (Afraid) Umm…you did? Pom: (Angry) Don't play dumb with us Arizona! Tianhuo: (Angry) Just because you made the prank harmless, don't mean nobody is not angry! Arizona: (Upset and scared) But i was gonna- Bluey: Play it on Velvet? I don't think so! Bingo: You really messed up Ari! Arizona: (Thinking) Ari? Oleander: (Angry) We are not gonna tolerate you hurting Paprika! Velvet: (Angry) So because of that, your punishment is staying in the fence for a month! Arizona: (Upset and angry) WHAT?! Velvet: (Even more angry) Oh i'm sorry, make that FOUR MONTHS! Arizona: (Really sad) But Velvet! This is'nt fair! Pom: (Disapointed) Yes it is Arizona. You went too far. Sol: Your actons hurt others in painful ways. Mi: Yeah! And you hurt her too much this time. Fa: You made a harsh choice Arizona! Arizona: But Fa! (This causes Fa to snap) Fa: (Angry and shouting) SAVE IT ARIZONA! WE DON'T WANNA F**G HEAR IT!! Arizona: (Scared) But guys- Velvet: (Angry and shouting) YOU WENT TOO FAR ON THIS PRANK! THIS PUNISHMENT IS FAIR!! Oleander: (Angry and shouting) YOU ALWAYS CAUSE ISSUES FOR PAPRIKA! YOU DON'T DESERVE TO BE HER FRIEND! Natsuki-meow: (Angry and shouting) YOU ARE JUST A LITTLE PEICE OF S*** ARIZONA!! Tianhuo: (Angry and shouting) YOU NEVER LET US DO THE STUFF WE WANT! Iris: (Angry and shouting) YOU'LL NEVER FIT IN WITH US! Arizona: (Crying) W-W-Well i didn't know it would make you guys angry. Velvet: (Angry and still shouting) NOW GO TO THE FENCE ARIZONA! Arizona: (Crying hard) B-BB-B-BUT VELVET Velvet: (Really angry and STILL shouting) NOW ARIZONA!! Arizona: …okay. (Arizona walks into the fence after all that harsh yelling. Shanty was spying on the harshness and felt bad for Arizona. So she walked over into the fence for comforting) TO BE CONTINUED.