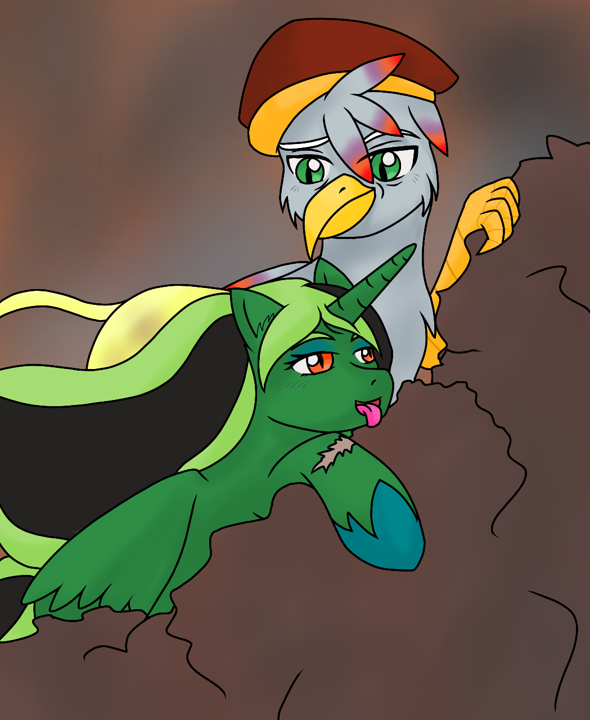 A redraw of a picture I drew before. The two charas are my Fallout Equestria OC's, Olive the Alicorn and Ambrose the Griffin.

Ambrose: Damn it, theres a lot more Raiders surrounding the place than I thought. I was hoping this would be easier.

Olive: What would be easier?

Ambrose: [jumps] Shit! Where did you come from?!

Olive:…The sky. You remember I can fly, right? Amby?

Olive: Yeah, but you won't shoot me.

Olive: Nope! My Amby is too smart to make such a rookie mistake like that.

Ambrose: …[sighs] Some days I hate you.

Olive: Yeah, but then I give a snuggle and you're all happy again. Do you need a snuggle?

Ambrose: No, darling, I'll be fine. Right now, I'm trying to focus on the matter in front of me.

Ambrose: Yeah, the boss wants in and I'm to come up with a game plan. But there are a lot more raiders than I predicted.

Ambrose: And get herself killed, which means I'll have to save her, which will probably kill me too.

Ambrose: For us both.

Olive: So whatcha gonna do, Amby?

Ambrose: I'll probably have to tell the boss that I'll need some time to scout the area and-

Ambrose: W-what? What is it?

Olive: I smell it!

Ambrose:… Really? Tch, as if such a thing exist in this shit hole. Moreover, I doubt you can smell anything through all the blood and sludge between us and the facility.

Olive: [snort] There you go again, doubting me. I told you Amby, never doubt the nose! [walks away]

Ambrose: [grumbles] Great, now I'll have to find this chocolate before it melts.

Ambrose is a older bird who was betrayed by the Talons for going against his contract but still considers himself a Talon member. Despite him clearly telling others about this, he is considered a 'former' Talon member purely because he is contracted to Peppermint Swirl, leader of the "Formers". Despite his advanced age, he is better shot than most younger Griffins and prefers sniping since it allows him to be as patient and slow as he wishes.

Olive is a 'young' Alicorn with a very ditsy personality. She is very easily distracted and tends to wander around a lot. She is also quite prone to accidents, since whenever she happens to push someone, something just barely misses them. She says its because her tail got 'twitchy' but no one believes her. She is rarely called upon by the goddess since her mind wanders.

Despite how different they are, the two get along great. Olive thinks Ambrose is a bit cranky but thinks its kind of cute, though he hates when she calls him that. Ambrose likes that she's good in a fight and knows how to be quiet when needed. They are often seen together, talking and laughing though Olive isn't as 'into' Ambrose as he is to her. She misses almost every hint he throws at her.

His companions often pity him when his flirtations going over her head.